Painting, Cinema and the Graphic Arts have been the worlds through which Sandro Simeoni has journeyed for half a century. He was one of the most important and prolific Italian Cinema Painters and for a solid fifty years had worked incessantly on sketches, illustrations and graphics for thousands of movie posters, daily placing his talents at the service of the Seventh Art. In parallel, he furthered his own artistic pathway creating works shown and praised in various exhibitions all across Italy, allowing in this manner, his art to be appreciated and sought after to this day around the world.

Sandro Simeoni was born in 1928 in the Province of Ferrara, in the town of Migliarino (today the Municipality of Fiscaglia). Upon reaching majority age, he moved to nearby Ferrara where he enrolled at the "Dosso Dossi" Art Institute and where, right from the start, he frequented the Pubblicine Studio founded by one of its most renown professors, the sculptor Laerte Milani. In this period, young Simeoni, along with being involved in a lively work activity as designer at the Milani studio, actively collaborated with various Ferrara satirical journals: "Il Vampiro", "La Nuova Scintilla", "Gioventù in Lotta", for which he mostly drew the portraits and caricatures. Many of these drawings would become part of the great bulk of works, about 600 pieces in all, exhibited in 1948 at Ferrara's Municipal Theater, in what would be Sandro Simeoni's first major solo exhibition. It was a great success with a huge draw of public; the local press wrote about the “psycho-humorous” art of “Ferrara's answer to Walt Disney”. 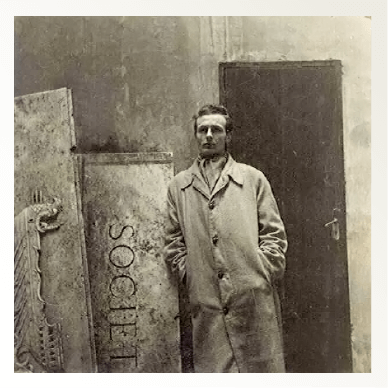 In the early 50's, he moves to Rome, where, thanks to his portraiture skills, he is soon hired as identikit artist for the police department. Thanks to the sheer quality of his renditions, Police authorities manage to identify and bring to justice various criminals. Frightened however by the threats received from several of these lawbreakers and worried about their sworn methods of retaliation, the young artist from Ferrara soon leaves that job and moves on. He collaborates as illustrator for various magazines, among which the photo-story weekly "Luna Park," in which his marvelous designs enrich the hugely popular section denominated “Le Avventure Impossibili”. In this period he also dedicates himself to illustrating book covers for novels and thrillers, but shortly later, it is following a friend's advice to try his luck in the field of movie posters, that Simeoni's career takes a decided turbo boots forward. He visits several of the capital city's production offices with rolls of his best drawings tucked under an arm. After only a few such attempts, the talented youth is hired as a poster artist. 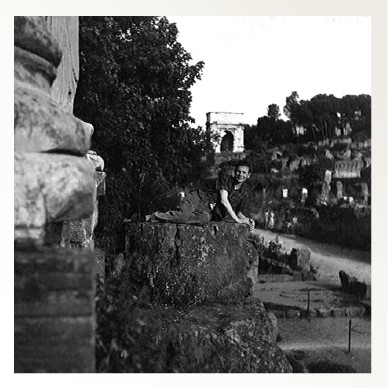 We are in the second postwar period and in Rome the movie industry is about to undergo a huge boom. The studios of Cinecittà are working around the clock with the many American productions that in those years are shot there. They called it “Hollywood on the Tiber” and it rose to international prominence thanks to its guaranteed low costs combined with the high quality of its many extraordinary workers and artisans. Simeoni finds himself at the right place at the right time and after an initial collaboration with Studio Favalli, an important "forge" for many poster artists of the period, in 1950 he makes his true debut when he designs lobbycards set for Roberto Rossellini's latest work “Francesco, Giullare di Dio”. From that moment on it will be a veritable escalation and the orders will pour in hot and heavy, allowing Simeoni to consolidate his working relationships with some of the giants of world cinema, such as Paramount, Globe, Columbia Pictures, Warner Bros, along with all the important national production houses. And so a plethora of films is drawn in these fertile years: “I Confess” and “Vertigo” by Hitchcock, “And God Created Woman” by Roger Vadim, starring a provocative Brigitte Bardot, “The Angry Red Planet” - “Saint Louis Blues”, “The Blob”, featuring a very young Steve McQueen, “Frantic” the directing debut of Louis Malle, only to cite a few of the international productions. Surely memorable among the Italian films of this period: “Un Americano A Roma”, a masterpiece by Stefano "Steno" Vanzina with a legendary Alberto Sordi as lead, “Il Conte Max”, “Totò All’Inferno”, “Il Grido” a work by his fellow Ferrara townsman Michelangelo Antonioni, “La Notte Brava” by Bolognini, “Esterina” by Lizzani and great many others. 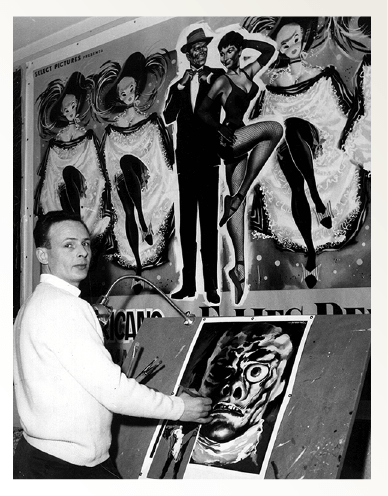 Simeoni daily produces a mind-boggling quantity of drawings and sketches, and this is because for each film the publicity offices of the production houses demand different images and proposals for the various formats of each publicity set (playbills, billboards, window cards, one-sheets, etc..). Along with being an ace painter, a good poster artist must be capable of creating works of high visual impact. Furthermore, he must accustom himself to the insane work rhythms required to satisfy the demands of his perennially panicked clients; his mission is to manage - with a drawing - to represent the true essence of a film while simultaneously captivating the attention of the audience and seducing them into actually going to the movie theater. Simeoni is perfect for this profession having been blessed with enormous talent as well as with remarkable pictorial technique and a knack for visual synthesis. Indeed, he has no trouble at all at emerging and becoming one of the business's most sought after professionals. Sometimes his fervent creativity even leads him to draw images that while fully representing the film in question, don't actually appear in the scenes of the movie itself, surprising those viewers who had only made their way to the venue to enjoy the delightful frames they had seen in the publicity posters.
Right from the first years of his professional activity, while working for many American productions, the artist from Ferrara would notice his name, in foreign countries, was all too often mispronounced ("Saimeoni" for example). To fix matters, he decides to sign his works as "SYMEONI," with a "Y", as a way of favoring its correct pronunciation, especially among the Americans; he also begins to sign his works with the three letters "SYM," a quick initial that we will eventually find scrawled in the corners of many of his later drawings. 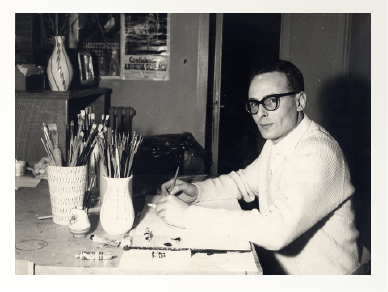 Between paint brushes and cigarettes

From the the 60's onwards, his output becomes even more prolific and important. Simeoni continues to come up with excellent ideas and creates poster works for the greatest filmmakers of that period, auteurs of the caliber of Fellini (“La Dolce Vita”), Antonioni (“L’Avventura”), Godard (“Fino All'Ultimo Respiro” e “La Donna è Donna”), Sergio Leone (“Per Un Pugno Di Dollari”), Pasolini (“Accattone”, “I Racconti Di Canterbury”), Francesco Rosi (“Le Mani Sulla Città”), Dario Argento (“Profondo Rosso”) and a great many others. But his art is also at the service of cinematic genres considered "minor." From the Erotic to the "Mondo" Movies, from “Poliziottesco” to Horror, Simeoni always draws with the same spirit and passion, often contributing with his artwork to the success and popularity of movies that on the big screen aren't always of the highest caliber. Sometimes he also amuses himself by hoaxing producers and press offices by using certain tricks of the trade to work his way around their the constant badgering and absurd demands for edits and changes. On the other hand, his dealings with the censorship authorities that often set their sights on him, aren't much fun at all! Indeed, in the course of his career, he must face various judicial proceedings arising from the content of his artwork. However, the majority of these legal spats aimed at blocking the promotion of this or that film, turn out to be underhanded methods of damaging certain titles and authors considered politically "problematic" in that particular historical moment. Then they'd often be resolved with pecuniary fines paid by the production houses of reference. Among the various films in question: “La Battaglia Di Algeri” by Pontecorvo, “Ultimo Tango A Parigi” by Bertolucci, “A Ciascuno Il Suo” by Petri, “I Racconti Di Canterbury” by Pasolini and various others. 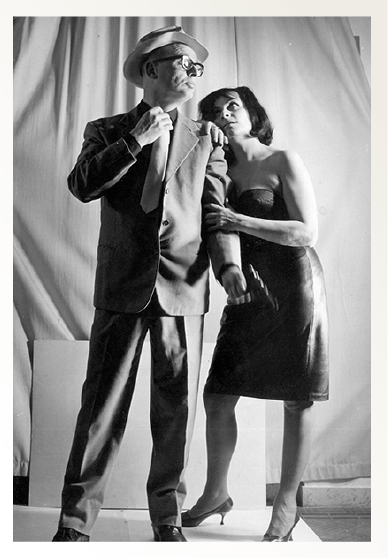 Simeoni posing with his beloved wife

Always innovative and in step with the times, Simeoni, unlike many of his fellow poster artists, constantly evolves his pictorial style, passing from the more realistic traits of the 50's to the graphical and abstract fusions of the 70's. He modernizes and proposes his layouts with colors both dazzling and flou, and with black and clear outlines as well as faded and broken (he often completely eliminates the use of curves), he utilizes bold and original lettering schemes, always different according to a film's genre. It is also thanks to these unique touches that his works remain "fixed" in the public's collective memory and continue to be a source of inspiration for many illustrators and graphic artists. He keeps this stylistic evolution alive also in his personal artistic quest, apart from the world of cinema, through the creation of paintings of various technique (tempera, oil, screen printing) which will be featured in many exhibitions across the national territory.
From the '80's onward, with the massive use of photography and the rise of computer graphics, the whole profession of poster artist unfortunately undergoes a steep decline and consequently, Simeoni's work will also starkly diminish. Nonetheless the Maestro goes on working and many Italian galleries show his paintings and graphics; what's more, in these years, he receives many awards and recognitions, among which a prestigious nomination as "Ambassador of Ferrara to the World". 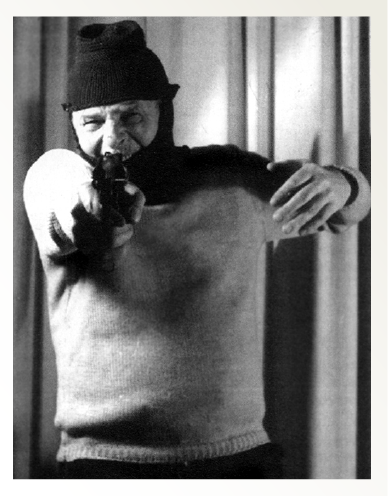 Self portrait for "Bloody Payroll" artwork

A great music lover, especially of the Classical and Jazz genres, throughout his whole career Simeoni has a steady rapport with the world of Music: in many of his works he applies the principals of "synesthesia," dedicating himself to the creation of a direct rapport between color and sound. Furthermore, his illustrations are used for the record covers of numerous movie soundtracks by almost all of the great historical record labels (Rca, Cam, Beat Records, etc..) that release vinyl records (33 and 45 rpm) featuring compositions from the most famous Italian masters: Morricone, Trovajoli, Ortolani, Piccioni, Umiliani. His "musical collaborations" continue well into the 90's, when new record labels such as, Easy Tempo and Irma La Douce ask Simeoni to visually characterize the covers of their vinyls and CDs. Thanks to the international distribution of some of these labels, there is renewed interest even in other countries for Simeoni's work and the Maestro has gained a certain cult status among collectors and aficionados all over the world.

Sandro Simeoni dies in Rome, in 2008 and unfortunately his figure is soon forgotten, but his works will continue to be an inspiration for many and his Cinema creations a steady point of reference in our country's collective memory and cultural and artistic heritage.